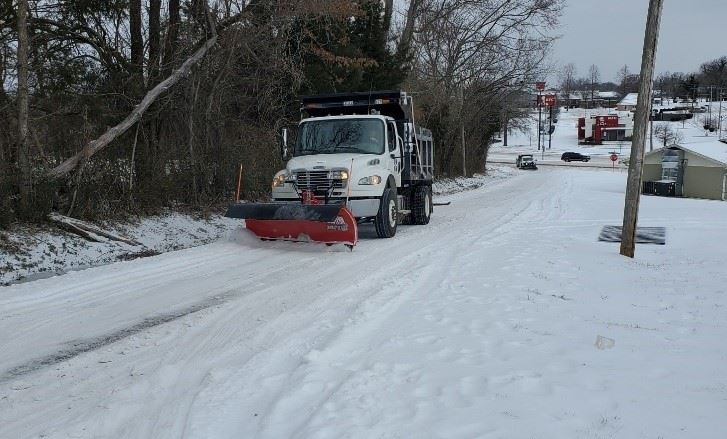 The average winter season snowfall for Middle Tennessee is around 10 inches spread over 4 to 5 months. Although snow and ice is not a major problem compared to other regions of the country, snow and/or ice storms have the same effect on the motoring public whenever or wherever they occur.

The Public Works Department is charged with the task of clearing streets during snow, and/or ice emergencies. Snow or ice operations involve many hours of work no matter how large or small. City crews usually work around the clock to maintain thoroughfares during the storm, and then start cleaning other streets after the last flakes have fallen.

The Tennessee Department of Transportation (TDOT) is responsible for most major thoroughfares in Columbia (typically four lane roads).

Please note that residential snow and ice removal is a recent service for Columbia. It is not a service normally provided in most cities in Tennessee. Most of the time it takes more than one pass to clear streets.

In order to clear streets in a timely and efficient manner, plowing or salting must be done in an orderly fashion. Trucks that shift from street to street, usually achieve nothing, but will guarantee that some areas will be missed.

During snow and/or ice storms, a truck is assigned to each Council Ward for the duration of the storm, but a two tiered priority system is followed.

Remember, not everyone can be first. All streets will eventually get done before the snow or ice operations have ended. Clearing streets usually takes 8 to 12 hours after the last snowflakes have fallen. Ice or sleet can add 10 or more hours to this process.Priority Number 1

Priority 1 Streets include all thoroughfares first, and then collector streets. This system of de-icing provides a treated or plowed street within a few blocks of all residential streets in the City. During snow and/or ice storms, these streets are continuously treated until they are cleared.